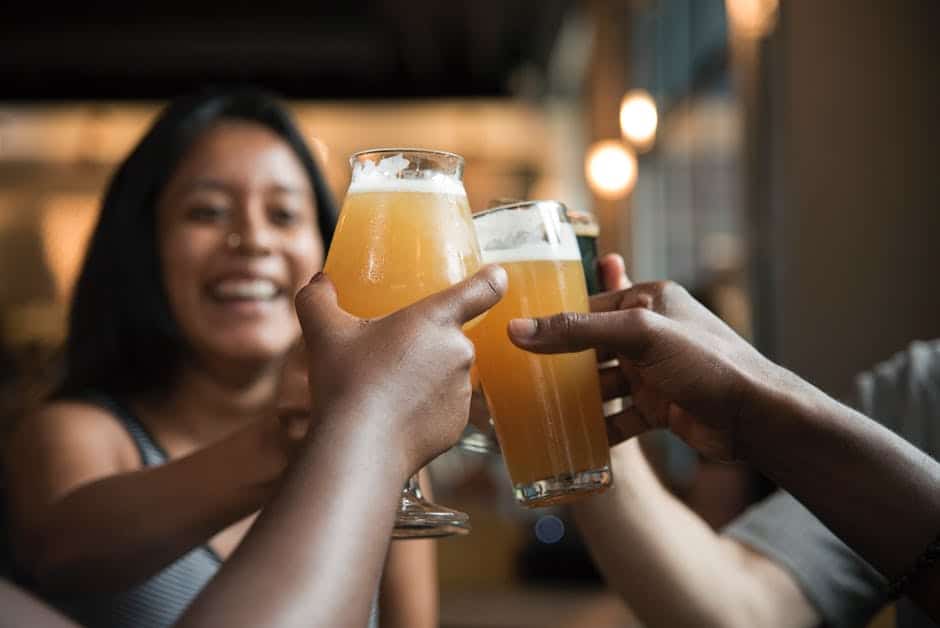 Aussies love beer! But how much does beer in Australia cost? What are the most popular brews? Why is it so expensive? How do the taxes work? Here’s all you need to know and the latest beer prices in Australia.

That’s a bottle of wine, five beers, three mixed drinks, and half a cider.

Australian beer sizes are confusing. They don’t really follow the metric system and they also vary from state to state.

With that in mind, here are the most common beer sizes:

It’s the smallest of beer sizes and will only make a teetotaler tipsy but it’s still beer.

The size for a pot or middy is 285 ml or 10 fluid ounces. In the Northern Territory, it’s known as a handle.

Tasmanian’s refer to it as a seven and in South Australia, they call it a schooner. While it’s the standard size in Victoria, if you love beer, you may not find this size satisfying.

A schooner size everywhere else but South Australia is 425 ml or 15 fluid ounces. States that consider this size to be the true schooner size are ACT, NSW, TAS, VIC, WA, and QLD.

And unlike everywhere else on the planet, South Australians consider this size to be a pint.

Pints everywhere else but South Australia are sized 570 ml or 20 fluid ounces. States that consider this size to be the real pint are ACT, NSW, NT, TAS, VIC, WA, and QLD.

Unlike most other sizes, the pint is based on the metric conversion of 20 imperial fluid ounces. In South Australia, they consider this size to be the imperial pint.

The jug size is universal all over Australia. Even the South Australians call 1,140 ml or 40 fluid ounces a jug.

This is the size most people get when they’re sharing a few beers with friends, especially if they’re trying to save a few bucks.

If you’re in South Australia, order a butcher if you want to drink 200 ml of beer. It’s not too big and not too small.

In Tasmania, if you only want to consume 115 ml of beer, order a small beer. At least this name won’t confuse anyone about what they’ll be getting.

In Western Australia, a bobby is 170 ml.

Here are the top 10 most popular beers in Australia:

Note that Fosters is not included on the top 10 list. That’s because it’s not actually an Australian beer. It’s made elsewhere. In the U.S. where it’s promoted as being “Australian for beer,” it’s been brewed in Fort Worth, Texas since 2011.

Now let’s look at the reasons those top 10 beers are so popular.

Pronounced as 4 ex, the joke is that Queenslanders call their best beer XXXX because they can’t spell beer. It’s made at the Castlemaine Brewery in Milton and has been for nearly a century.

XXXX gold is a mid-strength beer everywhere but Queensland where it’s actually the strongest.

Victoria Bitter or VB is Australia’s most iconic beer. It comes in a green tin can and is also referred to as Very Best, Vitamin B, and Victory Beer to its fans.

Those who dislike VB refer to it as Vomit Bomb and other unsavoury names. But it is the class Australian lager which has been a staple in the country since 1968.

Carlton Draught is a hugely popular lager, thanks largely in part to great advertising campaigns that began with the viral “Big Ad” in 2006.

The locals in New South Wales prefer Tooheys which features a stag on its can. It’s a historic Sydney brand that was founded by Irish immigrants.

The Toohey Brothers started brewing this long-time favourite back in 1869 and still brews this beer in the blue-collar suburb of Lidcombe today.

Coopers is the largest locally owned brewery in the country and it’s located in Adelaide. It’s also still mostly controlled by the same family that lent its name to this tasty beer.

Coopers makes a variety of beers such as the pale ale and also is known for having the best home-brewing equipment.

Matilda Bay is brewed in Perth and has been around since the early 1980s. It was widely considered Australia’s first craft beer but has since been sold to Carlton and United.

Other beer products made by Matilda Bay are Fat Yak, Redback, and Beez Neez.

It’s brewed at the foot of scenic Mount Wellington which is home to one of the oldest continuously operating breweries in Australia.

It’s said that an English born thief named James Squire was the first person to begin brewing beer back in 1788. While reports can’t be verified, it’s said he got 300 lashes reduced to 150 after stealing the ingredients to make his beer by giving kegs of beer to the Judge.

He was the first person to cultivate hops and open a commercial brewery in Australia. Each line of beer harks back to his life as a convict such as the One Fifty Lashes Pale Ale and the Nine Tales Original Amber Ale.

Craft beers have also gained popularity in Australia. There are now pale ale’s like Baxter XPA brewed in Queensland and Stone and Wood Pacific Ale brewed in NWS.

There are also IPA’s available like Bentspoke brewed in ACT and Balter IIPA brewed in Queensland.

While beer prices vary depending on where you are in Australia, it’s not cheap. Sydney is the 27th most expensive city in the world to buy a beer at an average of 7.87 A$.

Why Australian Beer is so Expensive

There are several reasons beer isn’t cheap in Australia. First, they pay the bar staff a living wage.

Also, barely is imported. And hops are expensive to grow.

Last, government excise makes beer expensive. Thankfully, that money goes to pay for important things like universal healthcare, so it’s worth it.

Beer is Cheaper than Caviar

If you still feel it’s too expensive, compare it to the price of caviar, which should make you feel as though beer prices are a bargain.

Excise rates for beer (and all other alcoholic beverages) in Australia are expressed per litre of alcohol (LAL). It’s calculated by multiplying the actual volume of the product by its alcohol content.

Also, excise duty on beer is payable on any alcohol content that’s above 1.15% by volume in the finished product.

Twice a year excise rates for alcohol are indexed. That usually happens every 1 February and every 1 August.

They base each unit on $ per litre of alcohol.

If the alcohol volume is less than 8 litres and not exceeding 3% BAC per individual container, the excise rate is 43.53.

If the alcohol volume doesn’t exceed 3% and the individual container is over 48 litres, the excise rate is 8.71.

If the alcohol volume doesn’t exceed 3% and the individual container is between 8-48 litres and it’s designed to be connected to a pressurised gas delivery system or a pump delivery system, the excise rate is 8.71.

Excise Rates on Alcohol Volume that’s Between 3% and 3.5%

If alcohol volume exceeds 3% but doesn’t exceed 3.5% and is in an individual container that’s less than 8 litres or 8-38 litres but not designed to connect to a pressurised gas delivery system or a pump delivery system, the excise rate is 50.70.

If alcohol volume exceeds 3% but doesn’t exceed 3.5% and is in an individual container over 48 litres, the excise rate is 27.26.

If alcohol volume exceeds 3% but doesn’t exceed 3.5%, is held in an individual container between 8-48 litres, and is designed to connect to either a pressurised gas delivery system or a pump delivery system, the excise rate is 27.26.

If alcohol volume exceeds 3.5% in an individual container, is less than 8 litres or is between 8-48 litres, and isn’t designed to connect to a pressurised gas delivery system or a pump delivery system, the excise rate is 50.70.

If alcohol volume exceeds 3.5% in an individual container over 48 litres, the excise rate is 35.71.

If alcohol volume exceeds 3.5%, is in an individual container between 8-48 litres, and is designed to connect to a pressurised gas delivery system or a pump delivery system, the excise rate is 35.71.

If it’s produced for non-commercial purposes and it’s using commercial equipment or facilities, and the alcohol volume doesn’t exceed 3% the excise rate is 3.06.

If it’s produced for non-commercial purposes and it’s using commercial equipment or facilities and the alcohol volume is over 3%, the excise rate is 3.53.

Learn How to Save Money so You Can Drink More Beer

We get it, Australian beer isn’t cheap. But it is tasty and perfect on a hot day.

We want to help you save money so you can afford to buy more beer. One of our favourite places to eat is Hungry Jack’s and we know you like it, too. Click here to find some money-saving vouchers.