Red Rooster is consistently releasing fantastic new meals and food items to their menu. More often than not, they come with killer promotions and deals to boost initial sales.

Check out all the current Red Rooster deals available at a store near you.

Get notified when new deals are released.

No crap, only deals. 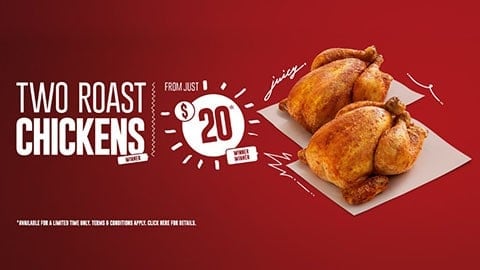 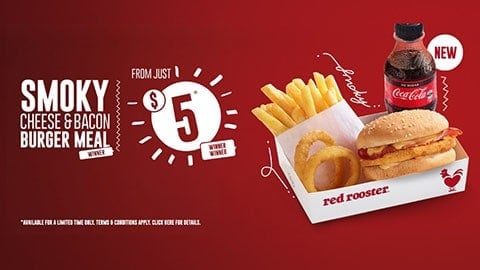 Smoky Bacon & Cheese Burger Meal for $5
Go to the deal 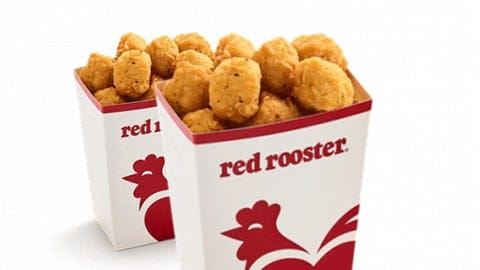 For too long, Red Rooster has managed to stay out of the popcorn chicken game. Now….they’re all in.

And their making a splash. Differentiating their popcorn chicken by adding the deliciousness of Buttermilk.

Grab yourself of box of the goodies for just $5.99 today.

Available Now
Go to the deal 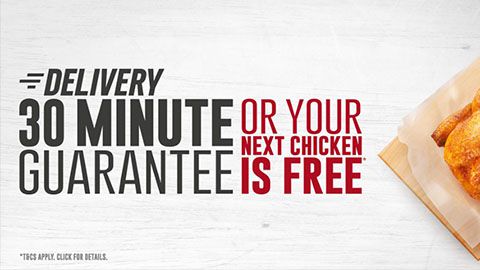 Sort of like that movie, 30 Minutes or Less, Red Rooster is hopping on board the guaranteed quick delivery game.

If you’re food isn’t delivered in 30 minutes or less when you order, you’ll get a whole roast chicken FREE (on your next order).

Here’s to hoping they hit every red traffic light on the way in!

30 Minute or Less Delivery Guarantee
Go to the deal 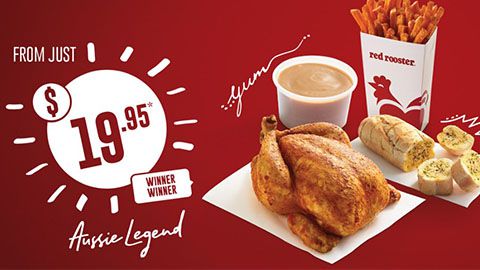 Grab a whole roast chicken, large sweet potato chips, large gravy, and top it all off with a side of delicious garlic bread. All for just $19.95.

Get down to your local Red Rooster today to get dinner sorted on the fly. 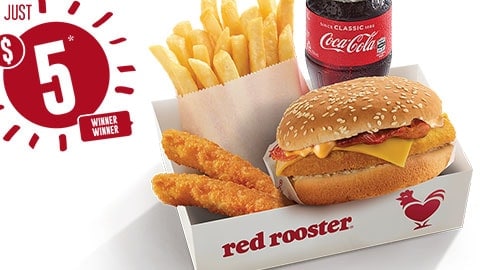 As long as you’re near a Red Rooster that is.

Go to the deal 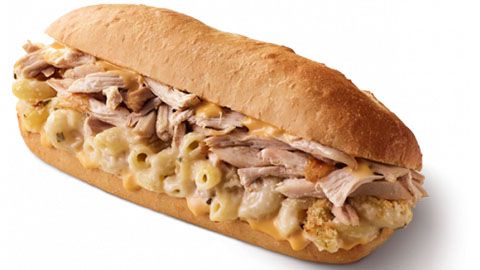 Red Rooster are pulling out the big guns for Australia’s winter.

Take a bite out of one of their delicious Mac & Cheese Rolls today just for $8.99.

Head in store to get the deal. 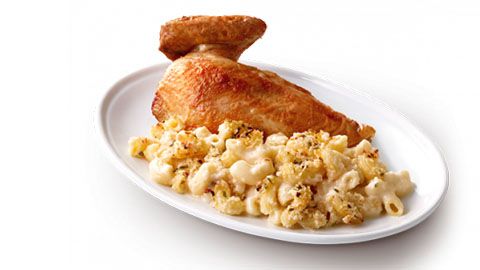 Fancy switching up the fries but still set on the 1/4 Chicken? No worries.

Red Rooster are now offering their famous 1/4 Chicken with a side of Mac & Cheese instead.

Quarter Chicken and Mac & Cheese for $8.99
Go to the deal 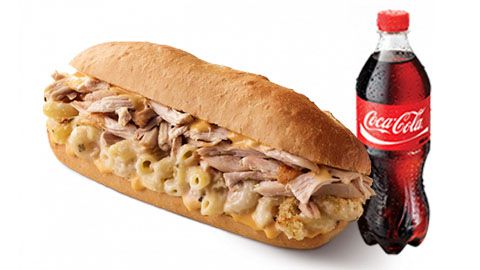 Turn it into a combo and add one a drink for $1.

Red Rooster’s chips are great – but now they’re even better.

Grab yourself a large chips loaded with chicken & gravy on top for a low $5. 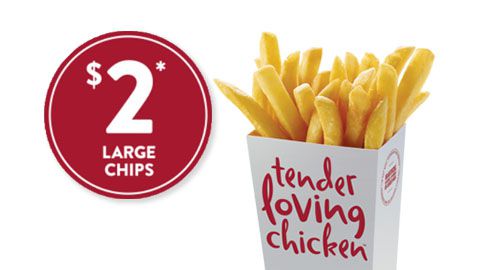 Get in early though, the deal’s only available before 4pm. 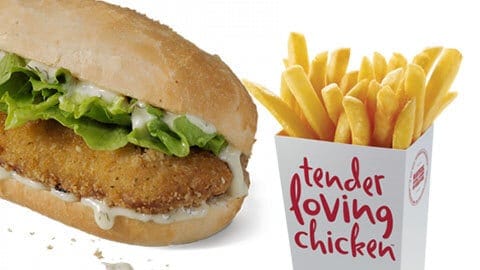 Red Rooster’s highly sought after promo is back. And now it’s got a 250ml Coke with it. 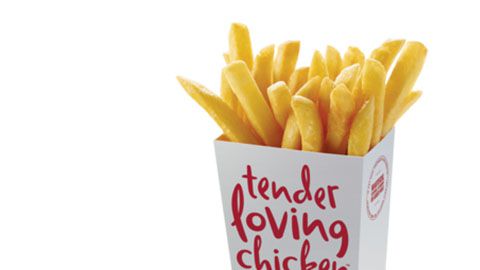 New coupon coming in for all Red Rooster stores around Australia.

They’re heavily promoting their delivery at the moment and are offering all customers who spend more than $25 – a FREE large chips.

Copy the coupon below and apply it during checkout.

SCYFM9RB
Go to the deal 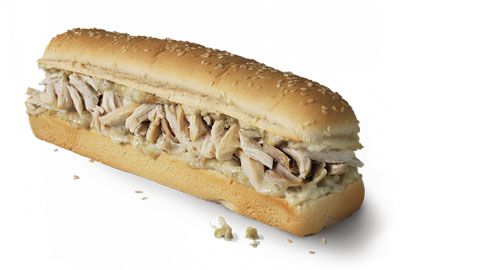 Order at least $25 on your Red Rooster delivery order, and they’ll throw in a FREE Chicken Roll on top.

The coupon isn’t valid for long though.

Apply it during checkout to get the deal.

6RMTZEX1
Go to the deal

Another deal where if you spend $25 on a delivery order you can add on another item for a massive discount.

Saving yourself $11 on the usual price of the Dessert Dippa’s box.

Copy & paste the coupon below during checkout.

DSDIPB
Go to the deal 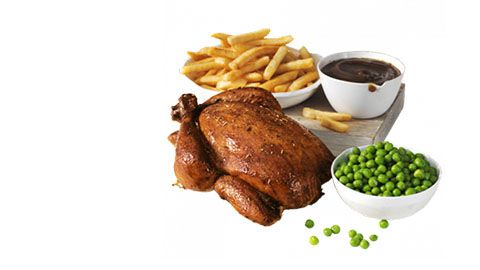 Or dinner for one hungry person!

Here’s what you’ll get:

Only available for pick up.

$15 Dinner for Two @ Red Rooster
Go to the deal 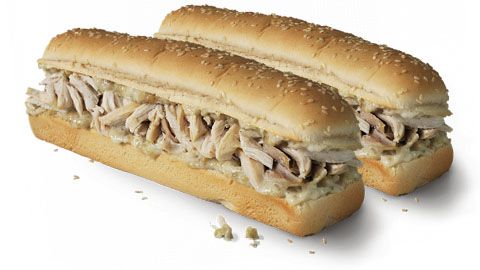 Head in store today and grab yourself two of their juicy Rooster Rolls for just $10.

Saving you around $3 total off of their regular price. 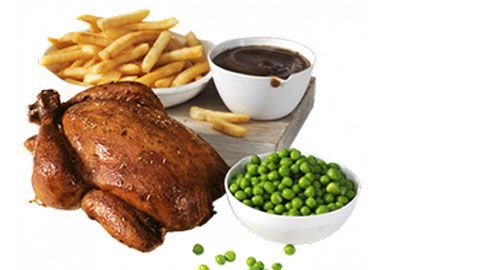 Looking for an easy meal for dinner tonight? Head down to your local Red Rooster and take advantage of this new promotion.

No coupon needed. Just head in store and order. 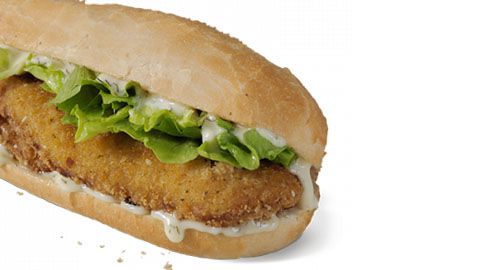 They’re bringing in some supercar drivers, some promo girls, and their mascot – and they’re giving away some free food to the first 100 people that ask.

Get their quick as they likely won’t last long. 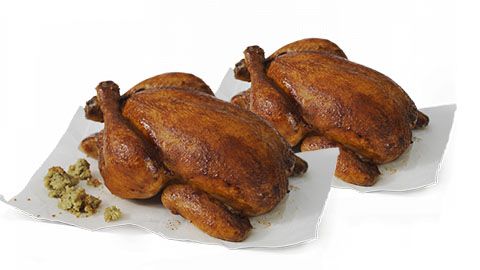 No need to even leave your house.

Just head online, add 2 Whole Roast Chickens to your order, then apply the coupon code below.

2CHICK
Go to the deal 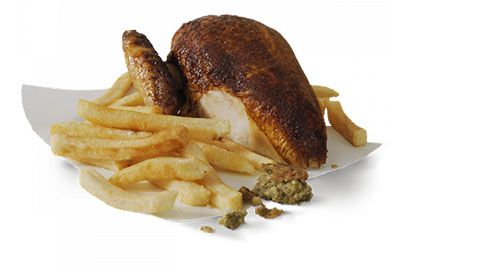 Red Rooster are opening a new store in New South Wales and are having a bit of a giveaway to launch.

They’re doing a special promotion and offering a FREE 1/4 Chicken & Chips on March 17th to the first 500 people that come through their doors.

Meet those two and you’ve got yourself an awesome deal at Red Rooster. 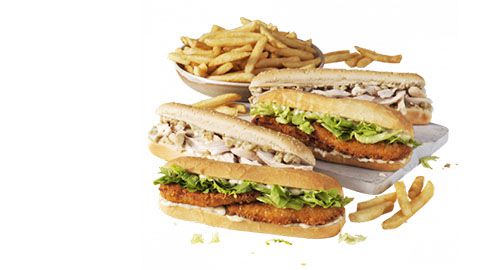 You and a mate could be dining on a killer deal at Red Rooster in the next few days.

Head in store, split the cost between each of you, and grab the following for just $25 total:

No coupon needed – just head in store to pick it up. 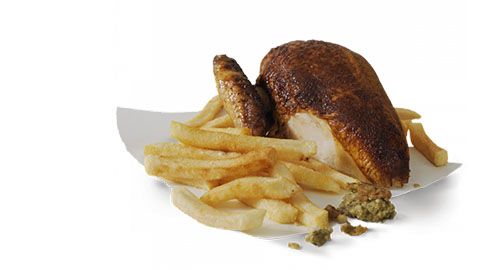 Unfortunately, no drink comes with this promotion so you’ll have to BYO or buy one extra.

Still, the deal is pretty good on its own. And if you’re feeling more than a little bit hungry – grab 2 for $10.

Only available until 4pm each day. 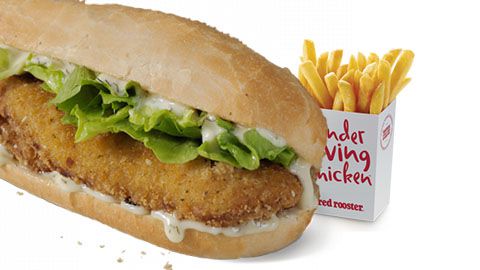 Back by the hugely popular demand shown in the first instance of the promotion.

Red Rooster is once again offering the Rippa Value Meal for a low $5.

Here’s what you’ll get:

Head in-store and pick it up today.

Note: The exact price of the deal may vary by location.

Rippa Value Meal for $5
Go to the deal 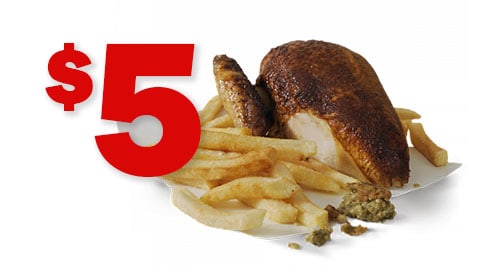 One of the greatest fast food deals we’ve ever seen.

Visit a Red Rooster near you, and grab the following just a single $5 note:

Fantastic price for some delicious food.