KFC is the most popular fried chicken fast food chain in Australia. And for a good reason – their chicken is delicious! On top of that, the KFC menu is packed full of delicious combos and deals these days.

Here are the latest KFC menu prices in Australia:

KFC is now taking on the famous McDonald’s menu by launching their very own Secret Menu. It was so secret that KFC themselves had to reveal it, with no one being able to find it on the app. 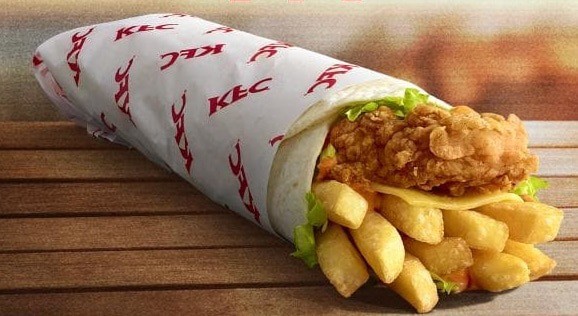 On that menu, you’ll find items such as the Kentucky Snack Pack (popcorn chicken & chips) for $4.95, the Zinger Chipster (Zinger twister with chips) for $6.95, and a few other interesting creations. Check out the KFC menu prices further up on the page to see the full list of secret items available.

Make sure to keep an eye on it as well, because KFC also announced they’ll be releasing new items to the secret menu throughout 2019.

Now, the big question – how can you order from the secret menu? Here’s how:

Similar to many of the other large fast-food chains in Australia, KFC regularly sends out a range of weekly discounts and deals to their loyal customers, letting you save a bit of cash on the KFC menu.

However, unlike Chicken Treat who deliver many of their coupons via brochures in the mail, KFC has recently preferred the more traditional method of marketing via TV ads and social media.

We’ll be biting our tongue in a second, though, because yes – they do still send out coupons in the mail sometimes. Just nowhere near as often as before.

Today, the best place where you can get your KFC meal for cheaper than it normally is is online. Keeping up to date on their Facebook page will allow you to get instantly notified when new promos are run.

Similarly, there are a number of online communities dedicated to sourcing coupons and deals for a variety of goods & services, one of them being fast food. 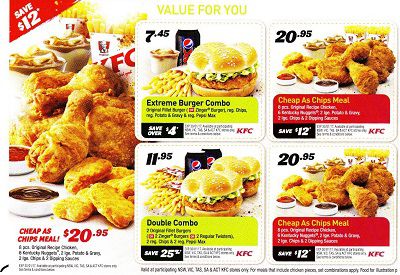 Kfc Coupons And Discounts In Australia

Due to popular demand – we now regularly post the latest deals and specials available on the KFC menu. You can see all the deals here – KFC deals.

One of the most popular (and recurring) deals is their 24 nuggets for $10. It was so popular when first released, both McDonald’s and Hungry Jack’s have gone on to copy the exact same deal. Australian’s like their nuggets!

As well, just like movies prices in Australia, Tuesday is a special day for KFC. So special, many people hold out for the whole week until it rolls around. Why? To get their much needed KFC fix.

It’s tradition in Australia – if you become one of the largest fast food chains in the country, you have to give the breakfast menu a go (like Hungry Jack’s & McDonald’s have successfully done). KFC did, and for a time they had quite a few delicious items on their menu, but it looks like it didn’t take off.

Their breakfast menu consisted of the standard hash brown and some bacon & egg variations of their twisters and rolls. On top of that, there was also donut sticks, and a brekky box which some say was actually quite good. 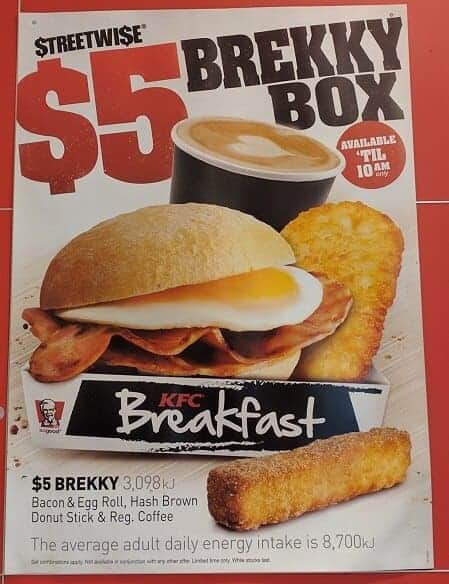 Kfc Brekky Box For $5 Available Until 10am

Unfortunately, many customers report that locations which did once serve breakfast, no longer do. We can only assume the concept of breakfast at KFC was too foreign to most which led to it being unprofitable for the company.

Hey – as long as they keep serving up their delicious chicken for the rest of the day, we’re still happy.

2019 Price Increases On The KFC Menu

In a move covered by few media outlets, prices nearly across the board on the KFC menu have increased between $0.50 and $1.50.

Increases were seen on the menu in early April 2019, although the actual change could have occurred at an earlier date. It’s unsure why KFC has chosen to only increase the prices of some burgers and boxed meals, whilst leaving others unchanged.

The most expensive standard boxed meal you can now get on KFC’s menu is no the Large Zinger Stacker Box for $16.45.

Hopefully we won’t see any more price increases throughout 2019.

Still, you can always grab yourself some fantastic KFC deals to save a bit of cash.

About KFC in Australia

Founded in 1930 by Harland Sanders in Kentucky, United States, KFC is now the second largest fast food chain in the world measured by sales, coming in behind McDonald’s.

They set up shop in America for 38 years, garnering the loyalty of many chicken lovers, before making the wildly successful decision to expand their operations internationally to Australia.

In 1968, the KFC brand showcased the KFC menu for the first time in Australia in in Guildford, Sydney. And as you can see, it was the start of a national takeover. 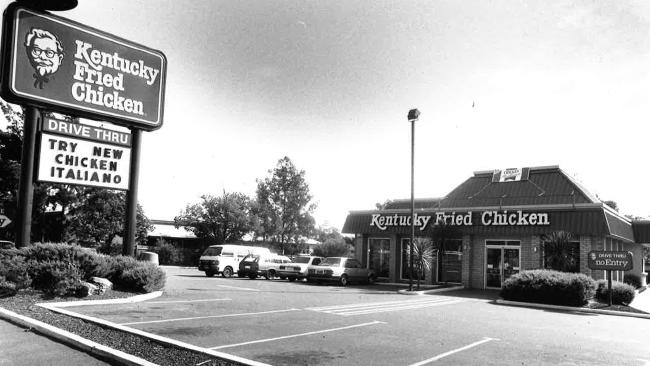 According to their website (link below), the fast-food giant now serves more than 2 million Australians every week through all of their 600+ restaurant locations in Sydney, Melbourne, Perth, Brisbane, Adelaide, and more.

With that being said, their Aussie operations are still only a small part of their worldwide fried chicken franchise. As of December 2015, the KFC menu could be seen in more than 123 countries, at more than 20,000 unique locations. Now that’s a lot of chicken.

Fun Fact: KFC is a child company of the even bigger conglomerate Yum! Brands. Along with KFC, they also own Pizza Hut and Taco Bell. Yum! Brands is a publicly traded company on the NYSE with a current market cap of $26.4 billion (Aug-17).

KFC finally announces it will now be offering delivery of its delicious chicken across after partnering with Deliveroo to provide the transport.

Order KFC Delivery and Deliveroo brings your favourite feed to you. Empty kitchen? Easy as! Sick of sangers? KFC to the office! Can’t leave the couch? Count on us!

To check if a KFC delivers near you, visit this website.

As you can see from all of their menu prices above, you generally can’t go wrong with grabbing lunch or dinner at KFC. With their family meals priced as they are, why not treat the kids as well? Their burgers are fantastic, and their chicken jucier than the half-time oranges at Woolies.

More questions about the KFC menu? Chuck them in the comments below.

Hey awesome site and massive thanks. I take the prices as a guide only as the fine print on here states. And instead of umming and ahhing when I get there. I can decide before I leave and make sure I have the right cash on hand too. Makes it alot easier when I am there to make my order.

Why the **** did they take away the Chicken and Wicked wings deal, literally the only family meal that’s worth buying.

No where near as good…

Totally disgusted with the Ultimate Box (Regular) meal I got today. Big box, but only small container of potato & gravy, 1 drumstick, very small chicken burger & small chips & a can of drink (not in the box of course – I would rather not have that included in the price, as I don’t drink the fizzy drinks, they make me sick). Have the audacity to charge $10.45 for that lot. Coating was falling off of the drumstick – chips were way too salty (as always) – there was a thick slice of something at the bottom of the… Read more »

you are an idiot

Absolutely devasted that they got rid of the $26.95 Chicken and Wicked Wings Pack. ==((

Lately what’s up with the chicken. Very soggy and the coating doesn’t taste the same way as it use to.

Thanks for this! You did a mighty good job! It’s so handy to find EVERYTHING in one go! 🤓

I’ve been buying a “2 piece feed” for many years now. It officially dropped off the menu probably 10 years ago (?) but there is still a key on the register to order it 🙂 It’s about $9.45 now I think – 2 pc original chicken, small chips, bread roll and small potato and gravy.

Unfortunately some newer staff get it confused with the “2 piece combo” so when ordering you have to make the specific distinction between the two of them.